Only when the last tree has died and the last river been poisoned
and the last fish been caught will we realise we cannot eat money.
Cree Proverb

Click on the titles below to link to the latest news stories about trees
​
Tree planting in UK 'must double to tackle climate change'
15 November 2018 The Guardian
Government advisers call for radical changes, including turning farmland into forests.  New forests would lock up carbon but also help to limit the more frequent floods expected with global warming.

A new leaf: the hardy trees reforesting the Amazon
18 Oct 2019 Guardian
Scientists in Peru have found tree species that thrive in land poisoned by gold miners; now they have started planting.

Scientists say halting deforestation 'just as urgent' as reducing emissions
4 Oct 2018 Guardian
Protecting and restoring forests would reduce 18% of emissions by 2030 and help to avoid global temperature rise beyond 1.5C

Celtic rainforest in Wales to be restored with help from EU
28 August 2018 Guardian
Almost £9m to be spent to protect wet and temperate forests from invasive species.

Tax havens shielding companies responsible for deforestation and overfishing
13 August 2018 Guardian
70% of vessels implicated in illegal, unreported or unregulated fishing are registered in tax havens, report finds. Money channelled through secretive tax havens has been used to fuel deforestation in the Amazon and illegal fishing around the world, racking up a heavy environmental toll but leaving few ways for businesses to be held to account.

​One football pitch of forest lost every second in 2017, data reveals
27 June 2018 Guardian
Global deforestation is on an upward trend, jeopardising efforts to tackle climate change and the massive decline in wildlife.

Giant African baobab trees die suddenly after thousands of years
11 June 2018
Demise of nine out of 13 of the ancient landmarks linked to climate change by researchers. Some of Africa’s oldest and biggest baobab trees have abruptly died, wholly or in part, in the past decade, according to researchers. The trees, aged between 1,100 and 2,500 years and in some cases as wide as a bus is long, may have fallen victim to climate change, the team speculated.

We can’t keep chopping down trees without harming ourselves
15 May 2018
The UK’s abundant woodland has proven health benefits. That’s why Network Rail’s destructive scheme must be opposed.

‘SOS’: the rainforest distress call carved into Sumatra's oil palms
27 February 2018 Guardian
With his chainsaw-wielding crew, artist Ernest Zacharevic has emblazoned a cry for help across an oil palm plantation, highlighting Indonesia’s deforestation. Dramatically carved into the landscape of a Sumatran oil palm plantation that borders one of the world’s most unique rainforests are three ominous letters: SOS. 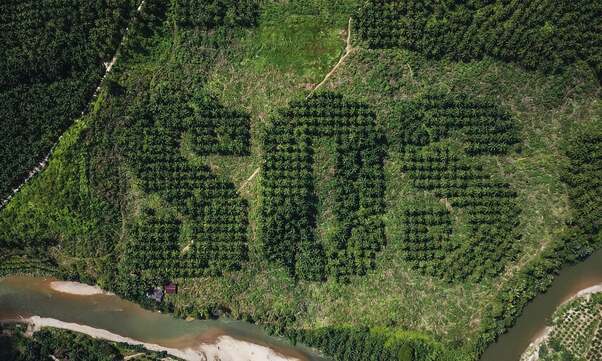