A cycle of performances of songs, poems and bird-callings
was set in and around the ancient oak tree
in Bruce Castle Park in the summer of 2016
​

Message to the Bruce Castle Oak 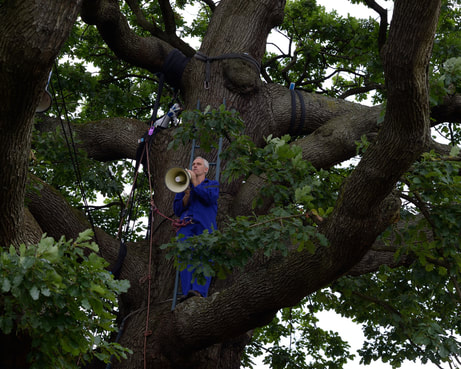 I was lucky enough to spend a couple of weeks around, under and in this tree for the Calling Tree project.

I think I'll always remember the time i spent in its gnarled branches and canopy of dark green leaves, kept company by small green crickets, weevils, leaf-hoppers, and a squirrel that regularly came and took a power-nap in its favourite hole. In April there was a pair of great spotted woodpeckers and 3 sets of hole-nesting starlings, and by late June there was at least one second brood of almost fledged young, shrilling constantly for food from the hole. Also checking out the numerous holes i saw stock doves, rose-ringed parakeets, nuthatches and blue tits. A mistle thrush was making regular visits in the spring to collect moss for its nest in the oak opposite. It was wonderful to be up in the tree and see and hear these birds at their own level, in their world. Swifts often swooped over the oak, especially in thundery weather, hoovering up insects. One of the strangest visits was a female mallard who was perched way up on one of the big boughs one morning.

It was really clear from my first day at the tree how important a resource it is not only to wildlife but to individuals and the community in Tottenham. I talked to so many people about their relationship with the tree - their memories of climbing it, falling off it, having their first kiss underneath it, seeing it in the snow, people's shock when branches came off after storms, plus all the myths and legends about the tree going back across the centuries… It is obviously loved and valued.

One of my favourite moments was seeing kids from local primary schools as they filed by look up into the tree and spot people up there (doing something - what?). Those fleeting looks of surprise and alertness aroused were somehow very touching and human.

On my last day at the tree, as everyone who worked on the project was gathering under its branches at dusk to say our goodbyes, i saw a noctule bat flying, and a little later a fox running along the line of trees opposite. I had the sense, now it had been freed of all the ropes and ladders we used for the project, that at last the tree was being given back to the park - to its wild and human  community.

I hope it survives for many hundreds of years to come, and continues to nourish the people and wildlife of Bruce Castle Park.
Ben Stammers, Calling Tree